Register a free account today to become a member! Once signed in, you'll be able to participate on this site by adding your own topics and posts, as well as connect with other members!

You are using an out of date browser. It may not display this or other websites correctly.
You should upgrade or use an alternative browser.

Adding a temperature sensor when you're out of thermistor ports

Staff member
Voron Owner
Do you have a V0 or SW, with a SKR Mini? Are you like me and Blargedy, and want to also measure your chamber temp for bragging reasons? Are you annoyed that the SKR Mini doesn't have any good thermistor ports?

Lets fix that, with a DS18B20 digital thermistor, via the Dallas one-wire protocol. These instructions are entirely for a Raspberry Pi. I'm sure other alt-Pi's work, but I have no idea how to make it work.

Supplies:
* DS18B20 digital thermistor. Non-affiliate link: https://smile.amazon.com/HiLetgo-DS18B20-Temperature-Stainless-Waterproof/dp/B00M1PM55K/ref=sr_1_4 . This is not the only one that will work, there are several listings that will show up if you search for "DS18B20" on Amazon or eBay in this form factor. Get the ones with the premade probe, not the bare sensors.

Step 1: Installing the Pi as an MCU in Klipper
All of this will be the instructions used to add the Pi as a secondary MCU in Klipper. If you have already done this (because you used an ADXL, for instance) you can skip to Step 2. These steps are lifted from Klipper's documentation, found at https://www.klipper3d.org/RPi_microcontroller.html .

First, SSH into your Pi. How to do this is outside the scope of this post. Run the following steps one at a time in the terminal:

Code:
Step 2: Enabling Dallas 1-wire
Add an overlay to the end of your boot config:

Code:
Step 3: Python script to enable Raspberry Pi pullup
The DS18B20 needs a pullup to work, and we can use software pullups in the Pi itself. The way I've found to do it is with a one-and-done Python script that executes on startup. SSH back in to the pi, and run the following (copy+paste the whole block, and run it in one shot):

Code:
If there are no errors, run the following command:
sudo crontab -e

Step 4: Prepare the sensor itself
You must power the Pi down before doing this step. You run a real risk of breaking your Pi if you plug things into it while powered on!
Thanks to Blargedy for the pictures! The pins we are using are the following in the GPIO header on the Pi:

Crimp 3 Dupont-style connectors onto the wires, making sure the rear wings grip the insulation and the front wings tightly grip the wire itself: 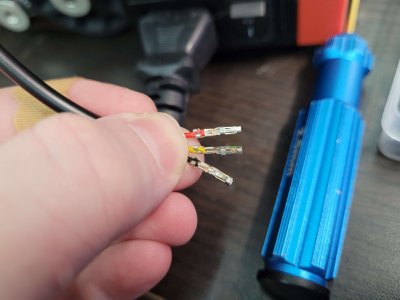 Insert the wires into a 1x5 header as shown: 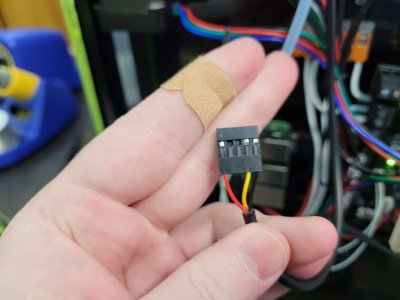 Plug the header into your POWERED DOWN Pi as shown (the top blue wires are power in): 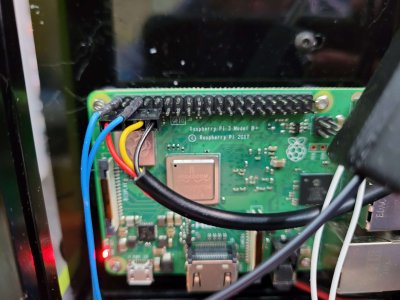 Step 5: Find the DS18B20
Power the machine back on and wait for the Pi to boot. Once it's running again, SSH back in, and run the following command to look for your temperature sensor:
ls /sys/bus/w1/devices/

Code:
The important part is the 28-xxxxxxxxx. That is the DS18B20 sensor on the bus. If you don't have anything that looks like that, something is wrong. Copy the whole ID (mine is "28-01191f2eaf2f", yours will be different), and add this entire section to your printer.cfg:

Code:
Do a firmware restart, and your new sensor should show up in your UI:

Those are some great pictures
Y

Trusted Advisor
Voron Owner
A few comments to complement @mallcop's contribution. 1-wire bus even on raspberry pi can handle several of these probes and it's not hard to connect them.
The connection is shown on the following speedpony scheme. 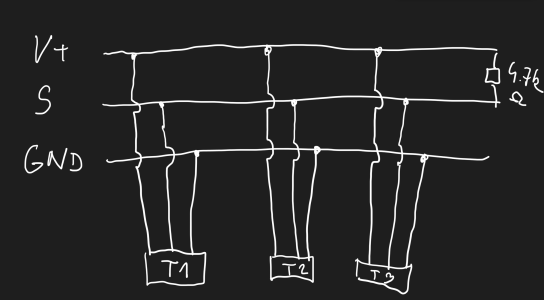 Might look complex, but let's analyze what we see... We see three temp sensors (T1, T2, T3) and they are independently, in parallel, connected to those three pins of raspberry (to be precise, we would say "on the same bus"). There is also lonely looking resistor connected between the power (V+) and signal(S) pin. That resistor is called a "pull-up resistor". While the raspberry pins have an internal pull-up, in my experimentation I've found you will need the external pull-up (and not use the ds18b20.py script).
While in theory, you could solder all together, it might be better to create the following helper board 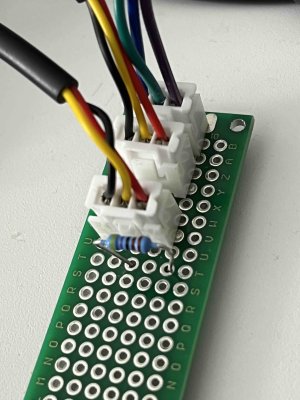 When you turn the board from the other way, you will see it's a bit more advanced soldering but nothing terrible 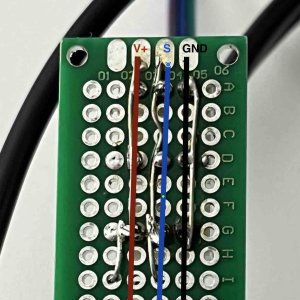 You see the connectors are again soldered in parallel on the bus (realized as the three parallel wires). The first goes in the raspberry, the other are used to plug in sensors.
Once you have enabled the 1-wire bus in the raspberry pi (as shown above), you will automatically see all available devices (linux will enumerate them automatically)
pi@mainsailos:~ $ ls /sys/bus/w1/devices/ 28-0300a279b4db 28-0316a2791c28 w1_bus_master1

Trusted Advisor
Voron Owner
Might be easy to create custom PCB for this, similar to the fan multiplier PCB that are sometimes useful
Y

Trusted Advisor
Voron Owner
One important thing I forgot to add is that these sensors (and the bus itself) are relatively slow, so do not use them to control heaters and other dangerous stuff.

Staff member
Voron Owner
This is great! Another option that adds more controllable channels as well as two thermistor ports is getting a Klipper Expander board. As “old” as it is, the board still makes a lot of sense for stuff like this, and it’s reasonably priced through lots of suppliers.

I run one on my V0 and it’s been working well. Newer boards do have more port options, but the expander is a good solution for those running older boards like the SKR Mini e3 v2.

Staff member
Voron Owner
Part of my desire for figuring these out is related to the WIP thread I have. The NanoPI Neo is super easy to get, but only has 1 easily-accessible USB port. The Klipper Expander can only talk over USB, so if the USB port is taken up with webcam / Pico+ADXL, you're kind of SOL.
You must log in or register to reply here.

7
Orange Pi for SBC instead of Raspberry Pi?